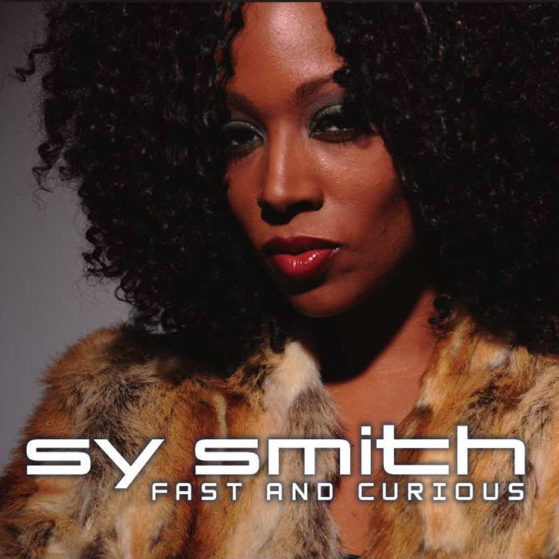 Available now on:
Update Required To play the media you will need to either update your browser to a recent version or update your Flash plugin.

Sy Smith’s fourth studio release Fast And Curious is exactly that. It’s plenty fast. And wonderfully curious. Produced entirely by electronic remixer, jazz musician, and deejay Mark de Clive-Lowe (aka MdCL), this project fuses elements of soulful house, downtempo electronica, and underground R & B to place Sy in a whole new class unto herself: Electronic Soul. Sy’s lyrical storytelling is top-notch and this time around, she’s not holding back on vocals either. Minnie, Diana, and even some MJ stylings are apparent as some of her influences as she shows off her vocal range and scatting ability like never before. Rahsaan Patterson’s guest appearance makes for a club-stompin’ duet on the funky, if not obscure, remake of Billy Ocean’s “Nights”. Sy’s uptempo swing on tunes like “Personal Paradise”, “The Primacy Effect” and “Let The Rain Fall Down” feel like a party in the jungle. While downtempos “Teena” and “The Ooh To My Aah” feel like a sonic love affair.

L. Michael Gipson’s Review for Creative Loafing ATL:
Rhythm is a dancer on Sy Smith’s latest, and her fifth LP truly is Smith’s greatest to date. Awash in a new wave ’80s sound, the album needs a warning label: “May cause flashbacks to neon necklaces, ripped sweats, and ‘Max Headroom.'” Still, with Smith and producer Mark de Clive-Lowe at the helm, the neo-throwbacks prove loads of fun. House-flavored acid jazz trips such as “Personal Paradise” and “Find My Way” deliver spacey, ambient grooves, while standouts “Nights (Feel Like Gettin’ Down),” featuring Rahsaan Patterson, and “Let the Rain Fall Down” take us spinning around the discotheque on the eve of the genre’s death. Smith’s pop chops aren’t big, but they serve every song, and her whistle notes deserve respectful nods. Some cool jams overstay their welcome with running times meant for the clubs, but you will leave sweating and smiling. (4 out of 5 stars)