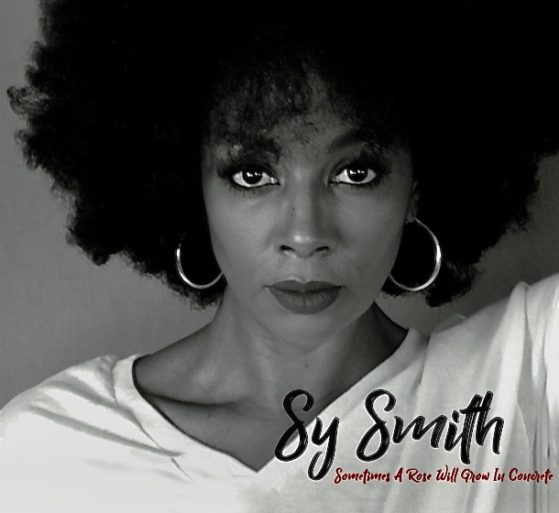 “Sometimes A Rose Will Grow In Concrete” (SRWGC) is the fifth studio album by critically acclaimed progressive soul artist Sy Smith. Often called the “Queen Of Underground Soul”, her previous works include “The Syberspace Social” (named in the top 10 albums of 2005 by The Boston Globe), “Psykosoul Plus” (2007) “Conflict” (2008, with charting radio singles “Fly Away With Me” and “The Art Of You”), and “Fast And Curious” (called “one of the best releases by a female” of 2012 by Soultracks.com). SRWGC is the first album completely written and produced by this multitalented singer/songwriter/musician and features her slick synth bass playing and lithe fingering on piano/keys along with her incomparable soprano voice and signature harmonies/vocal arrangements. Sy Smith is finally having her singer/songwriter moment (think a 21st century Roberta Flack) – this album flourishes with compelling musical/vocal arrangements, thoughtful lyrics and Sy’s voice sounding better than ever.

As a producer, Sy displays an expected but not-before seen maturity on SRWGC. When she does play keys and synth bass, she does both effortlessly; but she brings in some of the top sidemen when the songs call for a different touch. Sy enjoys international acclaim having toured/recorded with some of the best-known recording artists including Whitney Houston and Meshell Ndegeocello. She’s currently a featured special guest on tour with Grammy-winning trumpeter Chris Botti and is featured on his Grammy-nominated DVD “Live In Boston”. SRWGC features many of these previous/current bandmates including legendary percussionist Sheila E. (with whom Sy has toured/recorded) and violinist Lucia Micarelli (bka Annie on HBO’s Treme). Vocally, Sy’s soprano soars effortlessly; she shows off a sure-footed whistle tone (a la Minnie Riperton), confident jazz chops (Sy has been featured with numerous orchestras in tribute to Ella Fitzgerald, including at Carnegie Hall & Kennedy Center), a full-out commanding belt in her upper register – but usually her whimsical, conversational tone is utilized to tell the stories on this project. Still carrying a strong pen, Sy reveals victories won and battles still being fought as she allows her listeners into the most intimate spaces she’s ever exposed. The title track is a powerful, if haunting, ode to people who come through the harshest of trials and still bloom as beautifully as roses. Sy is that defiant rose throughout this entire project.

An in-depth look at the album

SY SMITH
Sometimes A Rose Will Grow In Concrete

Long renowned as the “Queen of Underground Soul” for her edgy, progressive mix of funk, neo-soul and R&B, Sy Smith launches a fresh new phase of her extraordinary, multi-faceted career with Sometimes A Rose Will Grow In Concrete, set for release on her indie label Psyko Records February 16. The critically acclaimed, multi-talented artist, whose previous album Fast And Curious was hailed as “one of the best releases by a female” in 2012 by Soultracks.com, showcases her transcendent soprano vocals and signature harmonies/vocal arrangements on a 9- track, 3-interlude set that marks her breakthrough singer/songwriter moment (think a 21st Century Roberta Flack) and finds her pushing the boundaries more than ever before as a vocalist, heartfelt, incisive storyteller and first-time producer.

In addition to infusing more of her jazz sensibilities than on any previous project, Sy – who has performed Ella Fitzgerald tributes with orchestras at Carnegie Hall and The Kennedy Center – shows off a sure-footed whistle tone (a la Minnie Riperton), and a commanding belt in her upper register. Most of the time, however, she brings a whimsical, conversational tone to the poetic, insightful and clever storytelling on SRWGC. As a lyricist, Sy reveals her triumphs and struggles – the victories she’s won and the battles she’s still engaged in – as she invites her listeners to share her most intimate spaces.

The title track is a powerful, haunting ode to the adversity of those who survive the harshest of trials, including her own personal challenges and health issues and those endured by her beloved grandmother, who passed away recently at 101. Yet literally and metaphorically, these survivors still bloom as beautifully as roses. Drawing inspiration from Maya Angelou’s classic autobiography, Sy sings, “Sometimes a rose will grow in concrete/ Sometimes the caged bird will sing…”

Sy balances socially-conscious tracks like these with more lighthearted fare like the album’s lead single “Now and Later,” an infectious, flirty song (featuring the singer’s dazzling horn arrangements) about being head-over-heels in love and waiting for a cold winter to thaw so she can put on a sundress and be her sexy best. Sy pays homage to her father – whose passions for street-corner harmony laid the foundation for Sy’s career pursuits – on a reprise of “Now and Later” simply called “doowop with dad,” which includes him telling stories about growing up singing doo-wop with friends in Queens before he, Sy and two other singers harmonize on the song’s irresistible hook.

Sy’s previous albums include The Syberspace Social, named one of the Top Albums of 2005 by The Boston Globe; 2007’s Psykosoul Plus, featuring stellar production from A Tribe Called Quest’s Ali Shaheed Muhammad and The Roots’ James Poyser; and 2008’s Conflict, which included the charting radio singles “Fly Away With Me” and “The Art of You.” An internationally acclaimed vocalist, Sy has toured and/or recorded with many legendary artists and musical greats, including Whitney Houston, Meshell Ndegeocello, Macy Gray, Chaka Khan and Grammy winning trumpeter Chris Botti. Her longtime association with bandleader Rickey Minor includes six seasons as a vocalist on “American Idol.”

In anticipation of the release of Sometimes A Rose Will Grow In Concrete, Sy invites everyone to visit her YouTube channel (YouTube.com/sysmith69) and Facebook pages (facebook.com/sysmithmusic) to watch #SySmithSessions, a series of five short clips documenting the process of recording the album and offering insight into her unique creative process. To promote the project, Sy plans to play spot dates in Los Angeles, New York, Washington and Chicago starting in March 2018. “Now and Later” goes for adds at Urban A/C and Jazz format radio in January, and Sy will be filming a short-form music video for rotation in the VH-1 Networks (BET, BETher, BETjams, VH-1Soul and more).

“I feel like this album finally paints a picture of who I am as a person and artist, completely, fully and unabashedly,” she says, “and I love the fact that each song reminds me of a very specific moment, whether of struggle or happiness. I remember reading somewhere that at any given time we only use 40 percent of our brain…well, SRWGC shows that I’ve used every bit of brain accessible to me!”