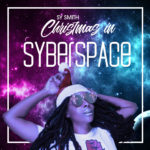 Los Angeles-based singer/songwriter Sy Smith surprises fans with a new release – a holiday mix aptly titled “Christmas In Syberspace”. As the project title suggests, Sy delves back into her electro-futuristic-soul roots with this endeavor; sonically reminding listeners of her underground roots (think of her 2005 release “The Syberspace Social”). Clocking in at just under 14 minutes, this ep is like a digital stocking stuffer – and Sy is giving the ep away for free on Bandcamp (but listeners can also purchase it at iTunes, Google Play, Amazon Music, and it’s available on all major streaming platforms after November 25, 2018).

For the production of “Christmas In Syberspace”, Sy tapped Nashville drummer/producer Isaac “Bam” Richardson whom she met… well… in syberspace. “Isaac contacted me on Facebook about a year ago and told me he was a big fan of my work. He said he was a producer, just getting started and wanted to send me some tracks. I told him, maybe kinda bluntly, that I really wasn’t looking for tracks at that time, I was knee-deep into ‘Sometimes A Rose Will Grow In Concrete’ and to hit me up next year. Well, he dropped me a message again this year, about two months ago. So I listened to his ideas and REALLY liked what I heard. I think after arranging and recording background vocals for John Legend’s ‘A Legendary Christmas’ album, I was inspired too! So, I recorded ‘Christmas Time Is Here’ to Isaac’s track, and then asked him if he’d be interested in doing a whole project with me!” Isaac and Sy tag-teamed this mini-album via the internet (the two have never met in person) – agreeing on songs, exchanging ideas and building on arrangements. “I really enjoyed working with Isaac. He’s got such a wonderful ear for core elements. He really colors with sound! This is his first R&B project, but I suspect that after hearing this, some of my fellow artists are gonna want get his info from me!”

“Christmas In Syberspace” features three holiday favorites dispersed with some creative interludes. After the “Hark! The Intro” sets the subdued mood for this holiday set, Isaac’s children anxiously tell him what gifts they hope to receive, then Sy’s familiar bell-tone soprano voice gently asserts Vince Guaraldi’s “Christmas Time Is Here”. She capitalizes on this popular melody by staying true to it, but then Sy adds a soulful refrain encouraging listeners to take the spirit of the holiday with them all year long. After another sweet interlude, Sy boldly takes on “The Sound Of Music” classic “My Favorite Things” by reworking the lyrics to truly reflect on HER favorite things:
“Shoes with fat laces and oversized glasses
Watching my people rise up from the ashes
Sharing a smile with that guy on the train
These are a few of my favorite things…”
After another interlude reworks a popular holiday carol (all the interludes do this), this ep closes with a foot-stomping “Little Drummer Boy” which Sy arranged and co-produced, reminding us that she does this pretty well too (she wrote/produced her entire latest lp “Sometimes A Rose Will Grow In Concrete” to rave reviews and 3 SoulTracks nominations). Isaac Richardson shows off his strong and steady, pocket (his church roots coming through loud and clear) with the head-snapping live drums, and Virginian trumpet player Duane Smith (of Hampton’s The Fuzz Band) provides a tasty horn arrangement.

Sy will be touring for the rest of the year with Grammy-winning trumpeter Chris Botti as a featured guest (as seen recently on his critically-acclaimed PBS special “Great Performances). Her tour dates with him include upcoming shows in Toronto, Boston and New York at the Blue Note for 14 nights. Sy will resume her solo dates in 2019 as a featured artist on the (already long sold out) Capital Jazz Supercruise! Fans can view her tour schedule at www.sysmith.com.